I'm trying out a new review format, and I hope readers will like the new style. I only review cozy mysteries that I have purchased/borrowed from the library. This blog has become something for my own pleasure, more than to obtain review copies, so I'm switching things up! Enjoy!! Listen to After the Funeral by Agatha Christie

A Free Serialization of the Complete Audiobook in Eight Parts
Presented by Sophie Hannah
Throughout the serialization, Sophie informs listeners on the crucial distinction between the truly impossible and the deeply unlikely, points out the magic of a very personal motive, and explains her belief that “the best stories are the ones that would only ever happen once.” Hercule Poirot is called on to investigate the murder of a brother and sister, in this classic Agatha Christie mystery now available in an updated edition with a foreword Sophie Hannah.
“He was murdered, wasn’t he?”
When Cora Lansquenet is savagely murdered, the extraordinary remark she had made the previous day at her brother Richard’s funeral suddenly takes on a chilling significance. At the reading of Richard’s will, Cora was clearly heard to say, “It’s been hushed up very nicely, hasn’t it. But he was murdered, wasn’t he?”
Did Cora’s accusation a dark truth that sealed her own fate? Or are the siblings’ deaths just tragic coincidences?
Desperate to know the truth, the Lansquenet’s solicitor turns to Hercule Poirot to unravel the mystery. For even after the funeral, death isn’t finished yet . , an instant bestseller. Reviews were outstanding, praising Hannah for her command of the character and voice. So when the time came to write a new story, Sophie knew there was only one way she would write another book—even though she enjoyed writing the first so much—she knew she would need to have an idea that was clever and compelling enough to think, 'This feels very Agatha-ish. Poirot MUST solve this case.'
And then it came to her, “…as if by magic (that really is how it felt!) an idea landed in my head. A motive for murder. It was incredibly simple—so simple, it almost seemed too obvious—and yet I didn't think it had been done before.”

"I'm a dead woman, or I shall be soon . . ."
Hercule Poirot's quiet supper in a London coffeehouse is interrupted when a young woman confides to him that she is about to be murdered. Though terrified, she begs Poirot not to find and punish her killer. Once she is dead, she insists, justice will have been done. Later that night, Poirot learns that three guests at a London Hotel have been murdered, and a monogrammed cufflink has been placed in each one's mouth. Could there be a connection with the frightened woman? While Poirot struggles to put together the bizarre pieces of the puzzle, the murderer prepares another hotel bedroom for a fourth victim.

Lady Athelinda Playford has planned a house party at her mansion Clonakilty, County Cork, but it is no ordinary gathering. As guests arrive, Lady Playford summons her lawyer to make an urgent change to her will – one she intends to announce at dinner that night. She has decided to cut off her two children without a penny and leave her fortune to someone who has only weeks to live…
Among Lady Playford’s guests are two men she has never met—the famous Belgian detective, Hercule Poirot, and Inspector Edward Catchpool of Scotland Yard. Neither knows why he has been invited…until Poirot starts to wonder if Lady Playford expects a murderer to strike. But why does she seem so determined to provoke, in the presence of a possible killer? When the crime is committed in spite of Poirot’s best efforts to stop it, will he be able to unveil the true reason behind Lady Playford’s drastic change of heart, and ultimately, identify the killer? 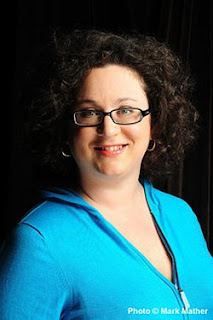 Sophie Hannah is the internationally bestselling author of 10 psychological thrillers, which have been published in more than 20 countries and adapted for television. Her novel The Carrier won the 2013 Specsavers National Book Awards Crime Thriller of the Year. Sophie is an Honorary Fellow of Lucy Cavendish College, Cambridge, and as a poet has been shortlisted for the TS Eliot Prize.
Author Links Webpage - Blog - Facebook - Twitter

Have you signed up to be a Tour Host? Click Here Find Details and Sign Up Today! A Crafter Quilts a Crime